Client gets an ugly duckling instead of a beautiful swan

All feminists including ourselves must dismiss the lessons of the ugly duckling story. Because without getting into it, who defines what is beautiful? 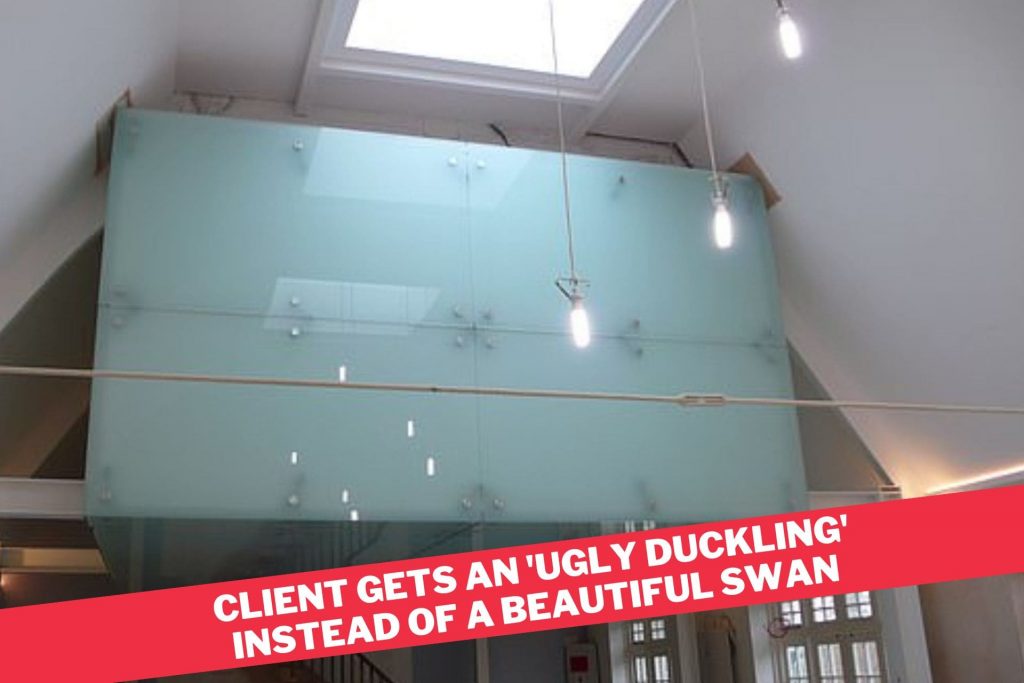 This is an article about construction horror stories. The whole point of sharing these stories is not shame the participants but instead to identify where everyone went wrong.

He hired an RIBA Architect called Daniel Marcal who created beautiful visuals and the banker, suitably impressed, commissioned the works for a contract sum of £450,000.

When the final finished room was revealed to the Client he absolutely hated it. The pictures (available freely online) show that yes, the finished product looked nothing like the original visuals and therefore the Client had every right to be unhappy.

The Client brought the Architect to court and successfully sued him for £500k in the high court.

The court judged described the box as ‘ugly and wonky’ and an ‘expensive white elephant’ and agreed that the best option was to tear it down and start again.

The Architect was criticised for serious failings in establishing a brief with the Client and managing expectations of what the final product would be.

The Architects registration board found Mr Marcal guilty of unsuccessfully conduct and gave him a twelve month suspension from the RIBA for his failings,

This case was obviously a serious blow for the career and business of the Architect in question. But he and his career and recover. What can we learn from this giant mess of a project?

But how did the delivery of the product go so wrong ? The Client obviously loved the original design and was prepared to pay for it so what went wrong?

The Client had the following complaints:

When the Architects registration board convened a professional conduct committee to investigate they concluded that the Architect had made the following mistakes that broke their internal rules:

The Architect did not:

He got a 12 months suspension from the RIBA.

Without access to the full facts, our opinion is that the Architect should have handed over the responsibility and risk of manufacturing and installing the glass to a specialist company so that if the builder did not deliver then it would be the builders fault and not the Client.

But it seems that there some serious failings in communication and perhaps too much closeness between the Architect and the suppliers leading to a failure to reject the suppliers work. Its interesting that the supplier was never mentioned in court.

Also, the Architect should have had every single change and agreement confirmed in writing or at least by email. He should have kept detailed records including diaries, drawing schedules, site visit minutes and so forth.

Some design changes happened included the addition of two steel columns which were not approved by the Client,